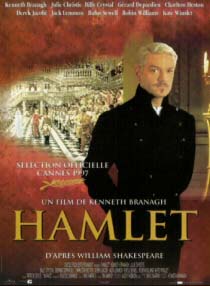 Hamlet is a 1996 film version of William Shakespeare’s classic play of the same name, adapted and directed by Kenneth Branagh. It is set in the 19th century — Branagh chose Victorian era costuming and furnishings —, and uses Blenheim Palace (built in the early 18th century) for exterior scenes. And it is filmed entirely in 70mm.
Aspects of the film’s staging are based on Adrian Noble’s recent Royal Shakespeare Company production of the play, in which Branagh had played the title role.
Branagh admits that he had developed «an obsession» with Hamlet that began at the age of eleven.
At least the 22nd time William Shakespeare’s most famous tragedy has been brought to the screen, Kenneth Branagh’s film adaptation of Hamlet was the first to preserve Shakespeare’s entire text, uncut and unabridged.
In a radical departure from previous Hamlet films, Branagh set the internal scenes in a vibrantly colourful setting, featuring a throne room dominated by mirrored doors; film scholar Samuel Crowl calls the setting «film noir with all the lights on».
Despite using a full text, Branagh’s film is also very visual; it makes frequent use of flashbacks to depict elements that are not performed in Shakespeare’s text, such as Hamlet’s sexual relationship with Kate Winslet’s Ophelia and his childhood friendship with Yorick. The film also uses very long single takes for numerous scenes.
Branagh’s own interpretation of the title role, by his own admission, was considerably less «neurotic» than others; gone completely was the Oedipal fixation so prominently featured in Olivier’s 1948 film. In the same line, Samuel Crowl affirmed that «Branagh’s Hamlet was remarkably polite, sincere, and mature in contrast with a series of manic, neurotic or passively crippled Hamlets that dominated British productions of the play in the 1980s».
Some critics, notably Stanley Kauffmann, declared the film to be the finest motion picture version of Hamlet yet made, and online film critic James Berardinelli has gone so far as to declare the Branagh Hamlet the finest Shakespeare film ever made, rating it as the fourth best film of the 90s and one of his top 101 favourite films of all time. The New York Review of Books praised the attention given to Shakespeare’s language, «giving the meter of the verse a musician’s respect,»; Branagh himself says his aim is «telling the story with utmost clarity and simplicity.»