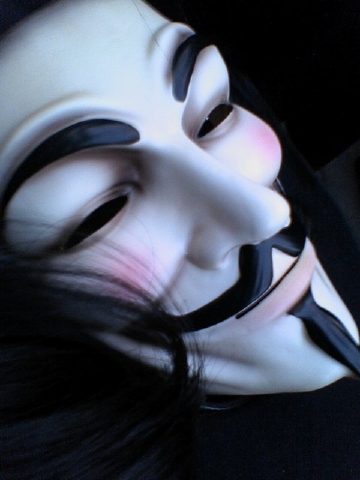 Remember, Remember
The fifth of November,
The gunpowder treason and plot.
I know of no reason
Why the gunpowder treason
Should ever be forgot.
[Traditional English verse recited for Guy Fawkes Night]
«But what of the man? I know his name was Guy Fawkes, and I know that, in 1605, he attempted to blow up the houses of Parliament. But who was he really? What was he like? We are told to remember the idea, not the man, because a man can fail. He can be caught. He can be killed and forgotten. But four hundred years later an idea can still change the world. I've witnessed firsthand the power of ideas. I've seen people kill in the name of them; and die defending them. But you cannot touch an idea, cannot hold it or kiss it. An idea does not bleed, it cannot feel pain, and it does not love. And it is not an idea that I miss, it is a man. A man who made me remember the fifth of November. A man I will never forget.»

V for Vendetta is a 2005 cult action-thriller film. It is an adaptation of the graphic novel by Alan Moore and David Lloyd. Set in London, United Kingdom in a near-future dystopian society, the film follows the mysterious V, a freedom fighter seeking to effect socio-political change while simultaneously pursuing his own violent personal vendetta.
In the year 2038, Britain has become totalitarian, ruled by the Norsefire regime. The story follows Evey Hammond, a young woman who is rescued from state police by a masked vigilante known as “V”. After rescuing her, they witness V’s destruction of the Old Bailey. The regime explains the incident to the public as an emergency demolition, but this is shown to be a lie when V takes over the state-run British Television Network (BTN) the same day. He broadcasts a message urging the people of Britain to rise up against the oppressive government on November 5; one year from that day, when V will destroy the Houses of Parliament. Evey helps V escape, but is put in danger. V saves Evey from being captured and interrogated by officials and does this by bringing her to his lair, where she is told that she must stay in hiding with him. Upon learning that V is killing government officials, she escapes to the home of one of her superiors, Gordon Deitrich. However, the state police raid Gordon's home, and Evey is captured. She is incarcerated and tortured for days, finding solace only in notes left by another prisoner, Valerie. Evey is told that she will be executed unless she reveals V’s whereabouts. Evey says she would rather die. She is then released. Evey discovers that her imprisonment was staged by V, to force Evey to experience what he had gone through, supposedly in order that Evey would understand integrity can be more important than life. Evey is infuriated by this at first, but later comes to believe that V was helping her, not hurting her. Here is the dialogue —
V: You said you wanted to live without fear. I wish there’d been an easier way, but there wasn’t.
Evey: Oh, my God!
V: I know you may never forgive me, but nor will you ever understand how hard it was for me to do what I did. Every day, I saw in myself everything you see in me now. Every day, I wanted to end it. But each time you refused to give in, I knew I couldn’t.
Evey: You’re sick! You’re evil!
V: You could have ended it, Evey. You could have given in, but you didn’t. Why?
Evey: Leave me alone! I hate you!
V: That’s it! See, at first, I though it was hate too. Hate was all I knew. It built my world, imprisoned me, taught me how to eat, how to drink, how to breathe. I thought I’d die with all the hate in my veins. But then something happened. It happened to me, just as it happened to you.
Evey: Shut up! I don’t want to hear your lies!
V: Your own father said that artists use lies to tell the truth. Yes, I created a lie, but because you believed it, you found something true about yourself.
Evey: No...
V: What was true in that cell is just as true now. What you felt in there has nothing to do with me.
Evey: I CAN’T FEEL ANYTHING ANYMORE!
V: Don’t run from it, Evey. You’ve been running all your life.
Evey: [gasping] I can’t... can’t breathe... Asthma... When I was little... [collapses while V catches her]
V: Listen to me, Evey. This may be the most important moment of your life. Commit to it. They took your parents from you. They took your brother from you. They put you in a cell and took everything they could take except your life. And you believed that was all there was, didn’t you? The only thing you had left was your life, but it wasn’t, was it?
Evey: Oh... please...
V: You found something else. In that cell, you found something that mattered more to you than life. Because when they threatened to kill you unless you gave them what they wanted... you told them you’d rather die. You faced your death, Evey. You were calm. You were still. Try to feel now what you felt then.
Evey: Oh, God. I felt...
V: Yes?
Evey: I’m dizzy. I need air. Please, I need to go outside.
V: There’s a lift. It’ll take us to the roof.

Later that day Evey leaves V, promising to return before November 5.
Inspector Finch, through his investigation of V's origins, learns how Norsefire came to power. Fourteen years previously, Britain had suffered from war and terrorism. The socially-conservative and openly fascist Norsefire party led a purge to restore order; enemies of the state (Muslims, Jews, blacks, homosexuals, communists) disappeared during the night. The country was divided over the loss of freedom until a bioterrorist attack occurred, killing about 80,000 people. The fear generated by the attack allowed Norsefire to silence opposition and win the next election by a landslide. A cure for the virus was discovered soon afterwards by the Norsefire company, Viadoxin. With the silent consent of the people, Norsefire turned Britain totalitarian, with their leader Adam Sutler as High Chancellor. The virus had been engineered by Norsefire as a plot to gain power, through deadly experimentation on "social deviants" and political dissidents at Larkhill detention center. V had been one of the prisoners, but instead of being killed by the experiments, he had gained heightened mental and physical abilities. V eventually destroyed the center and escaped, vowing to take revenge on Norsefire’s regime.
As November 5 nears, V’s schemes cause chaos in Britain and the population grows more intolerant and subversive towards government authority. On the eve of November 5, Evey again visits V, who shows her a train that he has filled with explosives in order to destroy Parliament through an explosion in the abandoned London Underground. He delegates the destruction of Parliament to Evey, believing that the ultimate decision should not come from him. Evey tries to convince V not to leave and kisses him. He tells her he can’t stay and then leaves to meet Party leader Creedy; who, as part of an earlier agreement, has agreed to bring V the Chancellor in exchange for V's surrender. Creedy kills the Chancellor in front of V, but V does not surrender, instead killing Creedy and his men. V, mortally wounded in the fight, returns to Evey. He tells her that he had fallen in love with her, thanks her, and then dies. His body is placed upon the train with the explosives.
Evey is about to send the train down the track, when she is discovered by Inspector Finch. However, Finch, having learned much about the corruption of the Norsefire regime, allows Evey to proceed. Meanwhile, thousands of Londoners, all wearing Guy Fawkes masks, march on Parliament to watch the event. Among these Londoners, we see the faces of those who have died, including a little girl shot by the police for wearing the mask; Evey's parents; Valerie, a prisoner in the cell next to V's whose words had given him his drive; and Gordon Dietrich. Because Creedy and the Chancellor are dead, the British Army stands down in the face of a civil rebellion. Parliament is destroyed by the explosion. On a nearby rooftop, Evey and Finch watch the scene together.
The film is explicit in portraying V as the embodiment of an idea rather than an individual through V's dialogue and by depicting him without a past, identity or face. According to the Official Website, «V’s use of the Guy Fawkes mask and persona functions as both practical and symbolic elements of the story. He wears the mask to hide his physical scars, and in obscuring his identity, V becomes more than just a man with a revolutionary idea – he becomes the idea itself»:

As noted by several critics and commentators, the film’s story and style mirrors elements from Gaston Leroux’s Phantom of the Opera. V and the Phantom both wear masks to hide their disfigurements, employ roses, control others through the leverage of their imaginations, have tragic pasts, and are motivated by revenge. V and Evey’s relationship also parallels many of the romantic elements of the Phantom of the Opera, where the masked Phantom takes Christine Daaé to his subterranean lair to re-educate her.

The multiplying villainies of nature do swarm upon him...
[skipping four of the original lines] Disdaining fortune with his brandished steel/which smoked with bloody execution... (Macbeth 1.2.17-18)

We are oft to blame in this. ‘Tis too much proved that with devotion’s visage and pious action we do sugar o’er the devil himself.
(Hamlet 3.1.46-49)

And thus I clothe my naked villainy
With old odd ends, stol’n forth of holy writ;
And seem a saint, when most I play the devil.
(Richard III 1.3.336-38)

Conceal me what I am, and be my aid
For such disguise as haply shall become
The form of my intent.
(Twelfth Night 1.2.53-55)