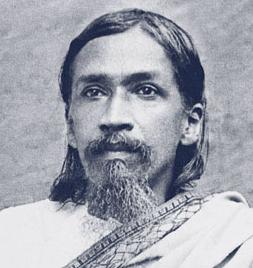 «Sri Aurobindo is not only the most original philosopher of modern India — he was also an accomplished yogi who based his metaphysical vision on his own inner discoveries.»

«Sri Aurobindo’s treatises are among the most important works of our time in philosophy, ethics and humanities. Sri Aurobindo himself is one of the greatest sages of our time.»

«Aurobindo Ghose, the foremost of Indian thinkers […] has realised the most complete synthesis achieved up to the present between the genius of the West and the East. […] The last of the great Rishis holds in his outstretched hands the bow of Creation Impulse.»

Haridas Chaudhuri, Professor of Philosophy:
«When a great idea is born, it shows limitless capacity for transcending fixed moulds of thought, and for reconciling diverse viewpoints. It goes on growing and expanding, refusing to be confined within the stone walls of any rigidly fixed thought structure. As a living spiritual force it goes on fertilizing the spiritual soil of the world, giving rise to varied forms of practically useful self-expression. ...Sri Aurobindo has given to the world such a living spiritual force, a dynamic truth-vision.»

«Sri Aurobindo has thus arrived at a comprehensive and, to all intents and purposes, all-inclusive view of the universe and life, providing a world philosophy which in effect brings together the East and the West.»

«Sri Aurobindo stands out as the single most accomplished yogi of modern India. Unlike traditional Indian yogis, and most modern yogis as well, Sri Aurobindo’s yoga is influenced by and enhances his vision for a transformed world.»
«Sri Aurobindo serves humanity as a spiritual master who directs and sustains all seekers whose inner aspiration leads them to a yoga as wide and deep as life itself.»

«I am very grateful that I came into contact with Sri Aurobindo so late in life, for after having wrestled with the ultimate problems of existence for years, I am now in a position to appreciate his solution to them […]. I have never known a philosopher so all-embracing in his metaphysical structure as Sri Aurobindo, none before him had the same vision.»

«The massive yet intricate beauty of The Life Divine can conceal itself from us how a paragraph, a sentence even, may contain within itself a vast range of thought. It is part of the genius of the work that its doctrines are exhibited not in a dry, and therefore un-illuminating, sequence, but in the manner of a painting: each new brush-stroke gives novel significance to the others, and the features emerge not by being mechanically filled in, but by a kind of patterned growth.»
«It is Sri Aurobindo’s genius that he has provided a framework of thought which, while it grows out of such ancient concepts as Brahman, Purusa, Prakrti, prana, etc., yet does not have merely a static view of things, but absorbs the sense, gained from both science and history, of the unfolding of man’s spirit.»

«Sri Aurobindo... whose integral philosophy is today recognised and appreciated as a monumental synthesis of the highest cultural values of East and West. ...There is an immense wealth of outstanding psychological and spiritual discoveries embedded in his voluminous writings, which stand at the watershed of a new era of yogic culture.»

«Sri Aurobindo’s yoga points the way toward the kind of transformative practice we need to realize our greatest potentials. No philosopher or contemplative of modern times has done more to reveal our possibilities for extraordinary life.»

«Sri Aurobindo is one of the most important and influential spiritual figures of our time, whose work deserves to be better known.»

«And it needed the supreme cultural genius of a Sri Aurobindo, the like of whom the spirit and the creative vision of India alone can create, to give a yet bolder or rather the boldest manifestation to a synthetization of insights in philosophic, cultural and spiritual wisdom and experience and to an invaluable integral conception of the triple Reality.»

«At the very first sight I could realize that he [Sri Aurobindo] has been seeking for the soul and had gained it, and through his long process of realization and had accumulated within him a silent power of inspiration. […] I said to him, “You have the Word and we are waiting to accept it from you. India will speak through your voice, Hearken to me”.»

«Of all modern Indian writers Sri Aurobindo — successively poet, critic, scholar, thinker, nationalist, humanist — is the most significant and perhaps the most interesting. […] He is a new type of thinker, one who combines in his vision the alacrity of the West with the illumination of the East. To study his writings is to enlarge the boundaries of one’s knowledge. […] He has achieved a reconciliation between matter and spirit. […] His final word is that we are, whether we like it or not, “members one of another”. Unless we realize this truth, and act upon it, we shall never have peace and goodwill on earth.»