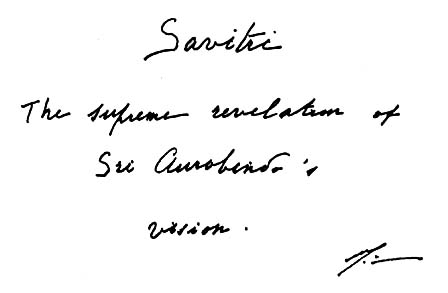 «During a period of nearly fifty years… [Sri Aurobindo] created what is probably the greatest epic in the English language… I venture the judgment that it is the most comprehensive, integrated, beautiful and perfect cosmic poem ever composed. It ranges symbolically from a primordial cosmic void, through earth’s darkness and struggles, to the highest realms of supramental spiritual existence, and illumines every important concern of man, through verse of unparalleled massiveness, magnificence, and metaphorical brilliance. Savitri is perhaps the most powerful artistic work in the world for expanding man’s mind towards the Absolute».

«A marvellous epic, luminous with the message of Immortality».

«Savitri is neither fantasy nor yet mere philosophical thought, but vision and revelation of the actual structure of the inner Cosmos and of the pilgrim of life within its sphere — the Stairway of the Worlds reveals itself to our gaze — worlds of Light above, worlds of Darkness beneath, and we see also ever-encircling life (‘kindled in measure and quenched in measure’) ascending that stair under the calm unwinking gaze of the Cosmic Gods who shine forth now as of old. Poetry is indeed the full manifestation of the Logos and, when as here, it is no mere iridescence dependent on some special standpoint, but the wondrous structure of the mighty Cosmos, the ‘Adored One’, that is revealed, then in truth does it manifest its full, its highest grandeur.
It is an omen of the utmost significance and hope that in these years of darkness and despair such a poem as Savitri should have appeared».

«Savitri, a poem like no other, is based on vision and experience that do not come in everybody’s way, and is sustained by and aesthesis that is geared to the quality of this vision and the nature of this experience».

«Savitri is a great epic which ushers in a new age in poetic creation. Being a masterpiece of the greatest mystic of our times it does not lend itself easily to mere intellectual understanding. Its meaning, rather its reality, is to be felt. One has to allow the vibration of it to sink into oneself, one has to arouse in himself the power of vision and see what the master is showing».

«…the mantra’s bard
Silvers a way over almighty abysms
To epic a world behind the soul’s paroxysms.
The worlds are stars shooting across a mind
More vast than galaxies of the blind
Who may touch one day after time’s long famine
The rare and occult flesh of Savitri and Satyavan».

«Savitri is the unfoldment of a supreme vision of Being-in-Becoming. It is a pilgrimage into the Infinite, a journey towards Eternity. Savitri belongs to the Future, the Future that is manifesting in our times upon waves of New Consciousness. Savitri is the odyssey of life divine. It is a journey of the embodied Spirit from “the hour before the gods awake” through endless distances of Time to realise and feel the love and oneness of all-existence in the truth of an eternal golden Dawn».

«I heard the Revelation of Savitri, Sri Aurobindo’s epic poem, truly an Apocalypse of the treasuries of spiritual experience and of the Perfect Divine Existence».

«Many are its splendours, countless indeed like the stars in the sky. We may use a most powerful telescope on the top of a mountain or put a Hubble in outer space to look at the universe which is a boundless finite. Still it seems to escape all observation. So does Savitri. Galaxies after galaxies speed beyond our keenest comprehension, — as if to reach some Unknown which they glimpse at the far edge but of which we have no knowledge. Billions and billions of suns, even as they come or go out of sight, illumine the nightly expanse of space. And whatever of that unknown they see they expectantly communicate to us; and these communications arrive in many ways, flashes, glimmers, electromagnetic bursts, quanta of various denominations or else steady radiations extending in all the directions of the spectrum, rich in content, rich in meaning. Suddenly in that process we become one with the sky. Astonishment is gone and also the nightly sky and ultimately what remains is interminable Unknown that is infinity-bound. We don’t need any more the night for the stars even as they become a part of majesty of the purple-gold day.
That is what Savitri gives to us».

«Savitri is the one poem which has intensest rhythmic expression. Most wonderful rhythm in English literature that you find is be found in Savitri. The style in Savitri is most marvellous. What is to be expressed and the manner of expression, they completely harmonise. And the images — abounding images!

«Without any exaggeration, one may say that Sri Aurobindo’s Savitri is not only a monumental work, it is indeed, a Book of the Century. In this book, we see Sri Aurobindo’s many-splendoured personality. Here he is seen as a yogi and a philosopher, a mystic and an occultist, a poet and a lover — all at once. Once in many centuries a personality of this high calibre makes its appearance on the world stage, and still more rarely does one come across a masterpiece of such rich quality as Savitri.
Savitri is a book of perennial inspiration for it contains the quintessence of Sri Aurobindo’s great spiritual adventure which had only one aim, to bridge the gulf between Heaven and Earth so that:

The Spirit shall look out through Matter’s gaze
And Matter shall reveal the Spirit’s face».

«The colossal labour Sri Aurobindo put forth to build this unique structure reminds me of one of those majestic ancient temples like Konarak or of a Gothic architecture like Notre Dame before which you stand and stare in speechless ecstasy, your soul takes a flight beyond time and space.
As it is, Savitri is, I suppose, the example par excellence of the future poetry he speaks of in his book The Future Poetry. Generation after generation will drink in its soul’s nectar from this perennial source».

«Savitri is an epic which sets forth with great precision and fidelity some of the highest states of mystical awareness. […] Sri Aurobindo endevours in this epic to express the Inexpressible, to convey with the accuracy of a scientist, the clarity of a philosopher and the imaginative and emotional vividness of a poet, certain states of intuitive and spiritual experience which used to be expressed by the ancients in myths and parables».

«Savitri was meant to create in massive proportions the kind of poetry that, in his published literary criticism, he [Sri Aurobindo]used to designate as hailing from “Overhead” planes — the ranges of consciousness broadly envisaged by ancient Indian scriptures as lying hidden above the human and possessing an inherent light of knowledge and a natural experience of the infinite».

«Of all the poetry in the world, Savitri is in a supreme class by itself. It is the master poem; the full voice that is Power of the Avatar, Love, Beauty, plenary Knowledge. To give oneself to Savitri, to open one’s heart and one’s whole being to it, is to give oneself to the Divine, and the rewards are incalculable and immeasurable».

«The rhythms of Savitri are the footsteps heard in the corridors of the soul. The themes of Savitri are each one’s deepest secret, one’s most private dealings with the Universal and the Transcendent».

«Sri Aurobindo, who was a poet first and then the divine master of Integral Yoga, is therefore not only an explorer and a discoverer but a conquistador and

A colonist from immortality

and his spiritual poetry, expecially the epic Savitri, is charged with mantric power which at every step overwhelms us with

Savitri with its 23,837 lines is a vast epic, unique in its sustained grandeur and sublimity revealing to us plane after plane of spiritual illumination».

«If we study Savitri we can trace five caracteristic elements, which are: height, serenity, wideness, grandeur, and delight».

«Sri Aurobindo’s Savitri is a vast ocean and one may, upon reflection, go in pursuit of the choicest of pearls».

«A divine cornucopia, Savitri is inexhaustible, and lends itself to as many approaches as there were seekers yesterday, are today and will be, in ever growing numbers, in times to come».

«A subjective poem, Savitri demands a different order of sensibility, an inwardness that is uncommon».

«Sri Aurobindo has made the impossible possible. His Savitri is a cosmic epic and concerns all men and women and times».

«Savitri has the clarity of direct revelation which is the caracteristic of the Vedas and Upanishads. It has therefore the utterness of speech of the spiritual and not the glimmering beauty of a mystical experience, it is not the sybil who speaks here but the seer».

«Sri Aurobindo has caracterised his poem[Savitri] as a legend and a symbol. The day will come when poets, philosophers, and neo-scientists yet to be born, will discover immense interest in thi marvel of versification which combines in it all the aspects of the Absolute».

«But Savitri remains inexhaustible, embodying in its nectarean message “an immortal Sunlight radiating over the future”, and our ‘critiques’ are no more than humble approaches and offerings. In the end one surrenders to the Poem itself, and its alchemic power and glory».

«It would be a mistake to call Sri Aurobindo modern even as it would be incorrect to call him ancient either. For he is beyond Time: he accepts whatever is good from the past equally as whatever is good in the present. But pre-eminently he is a poet of the future. The poetry he has given in Savitri, is as yet unfathomable for the average human mind of today. The knowledge he has utilised as the basis of that poetry is the Yogic knowledge which has yet not become the common possession of human consciousness. That poetry will be appreciated better when, some time in the future, humanity — or at least a part of it — has received glimpses of those invisible yet very real occult worlds. For Savitri is no composition of an ordinary poet, but that of a Poet and Seer of the Supermind, chosen by the Divine for the fulfilment of the next step in the evolution of mankind».