Creation? Evolution? Or Both?

«The affirmation of a divine life upon earth and an immortal sense in mortal existence can have no base unless we recognise not only eternal Spirit as the inhabitant of this bodily mansion… but accept Matter… as a fit and noble material out of which He weaves constantly His garbs, builds recurrently the unending series of His mansions.
Sri Aurobindo, The Life Divine, I.II

German philosopher Immanuel Kant would say both the materialists and the fundamentalists see the world through different set of lenses. Today, thanks to Sri Aurobindo, we have an even clearer lens through which to view creation and evolution theories. Although it appears to our ordinary consciousness that spirit and matter are at opposite poles, Sri Aurobindo perceived the evolution as a “self-unfolding” of the spirit. What is necessary in his schema is to understand the hierarchy of the levels of consciousness from the subconscious involved in matter through the ascending steps into the spirit.

Based on his own experience of a spiritual consciousness beyond the rational mind, Sri Aurobindo developed a theory that the ongoing process of change is the evolution of consciousness and therefore an integral part of the creation connecting humankind with all life. If the world and every thing in it is an evolution of consciousness, then evolution is spiritual as well as biological and in no way contradicts either scientific findings or the meaning of scripture. Sri Aurobindo called evolution the ascent of matter, life, and mind to the true home in the spirit. He considered evolution a growth out of ignorance into conscious awareness. Before evolution could begin, however, there had to be an involution or descent of spirit into matter, life, and mind.

During the process of evolution the spirit directs every step to spiral upward. The first step is the evolution of matter out of the nescience. The involution into nescience pushes the evolution upward resulting in organized matter (natural law) in which each atom holds infinite potential energy. Because of the involution of the spirit, atoms combine to form a molecule, and hydrogen and oxygen unite to make water. The second step in evolution is life. As matter evolves into life, it does not reject its old basis, rather new impulses appear that were implanted in it. Each cell or unit of life holds within itself the power of becoming. The third step is the evolution of mind. With mind appears the mental or intellectual consciousness in humanity. Mind does not leave matter and life behind — it assimilates both.

Although intellect gives us great capacity to reason, it cannot answer the questions “Who am I?”, «What created this world?”. But Sri Aurobindo went beyond the mind and found a greater power of consciousness that he called supermind or truth-consciousness. The descent of supermind into humanity would mean a transformation of everything in the world. The lower evolutionary stages in nature would awaken to a greater action of the latent truth in them and human beings would break the bonds of ignorance by joyfully ascending to the supramental consciousness of truth, beauty, and goodness:

And when that greater Self comes sea-like down
To fill this image of our transience,
All shall be captured by delight, transformed:
In waves of undreamed ecstasy shall roll
Our mind and life and sense and laugh in a light
Other than this hard limited human day,
The body’s tissues thrill apotheosised,
Its cells sustain bright metamorphosis.
Sri Aurobindo, Savitri, I.II.V.713-720 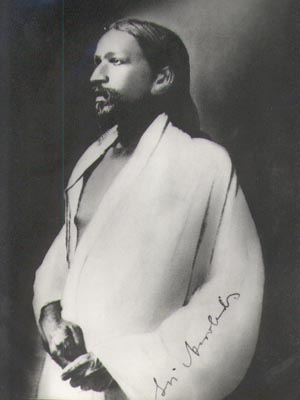