Barindra Kumar Ghose (1880-1928), was Sri Aurobindo’s youngest brother and his right-hand in the revolutionary days.

He wrote an unpublished book entitled “Sri Aurobindo (As I Understand Him)” from which we have chosen the excerpt that follows, concerning the meeting of Sri Aurobindo with a yogi at the end of december 1907.

«After the break up of the Congress at Surat Aurobindo came to Baroda, the capital city of His Highness the Gaikwar. A few months back while searching for a spiritual guide for our political workers I had been to Swami Brahmananda’s Asram at Chandote on the banks of the river Narbada. At that time there was a dawning sense growing in us — the young dedicated workers — that the deliverance of India was not possible without spiritual power. […] The great Yogi Brahmananda of Nurbada has passed away some years before and I found his disciple Keshavananda to be a dry as dust pedant and a mechanical Hatha Yogi knowing no higher yoga at all. But quite accidentally I had met for a few minutes a Maharashtra Brahmin, Vishnu Bhaskar Lele by name, in the Chandote Asram. I did know that this man was a great and real Yogi. While returning to Bengal quite disappointed in my quest, I met Lele again in a friend’s house at Navasari. He made me sit in a dark room with him for a few minutes and as a result three days afterwards I had my first glimpse of spiritual awakening, my first psychic experience.
As soon as the Surat Congress was over I wired to Lele requesting him to come to Baroda to meet Aurobindo. Crowds with flags and national cries followed us from the station and students unyoked a carriage and putting Aurobindo, myself and a Sannyasi, Sakhariaswami, on it, pulled it for some distance. In the midst of a surging crowd we reached Khasirao’s Bungalow at 8 A.M. and immediately after Vishnu Bhaskar Lele arrived. I left Aurobindo alone with him for half an hour.
The next day Lele came again and requested Aurobindo to sit with him continuously for seven days all alone and in silence in a quiet place. At that time nothing was more difficult than this to arrange. Aurobindo had become the idol of the nation and a wonderful halo surrounded him producing a mysterious magnetic attraction for him in the hearts of our young men. Anybody, who was in national work anywhere, needed and sought his advice and guidance. Day in and day out, crowds surrounded our house and programmes of public meetings were being arranged for him.
Lele suddenly spirited Aurobindo away from the midst of all this commotion to a lonely old place tucked away in the heart of the city. There, day in and day out, the two of them sat wrapped in deep meditation facing each other. Their simple needs were looked after by Vishnu Bhaskar’s wife, a matriculate girl of small stature of very subdued nature. I was also there and used to sit in meditation with them morning and evening in my restless and perfunctory way. My mind was divided between my ambitious national work and this inner life of Yoga.
Seven days passed almost in continuous and silent meditation while batches of young men traversed the town in search of their newly-found leader who had so suddenly and mysteriously disappeared from among them upsetting all their crowded programmes and arrangements. When Aurobindo was at last permitted to come out and attend a meeting in the famous gymnasium there among his ardent admirers, a great and abiding peace had descended on him which from thence forward formed the basis of all his future Sadhana. […]
Lele had certainly acquired great yogic powers, yet he had his frailties too. He was really a khanda yogi or an imperfect Yogi. While leaving Baroda, Aurobindo could feel and clearly detect the very human frailty of this wonderful man. […]
Straight from this Aurobindo went to Poona. He had to face a huge audience in a monster meeting. He rose to speak without preparing his speech and almost went through the identical experience which had come to Vivekananda before delivering his maiden speech at the Parliament of Religions in Chicago. Aurobindo got up to speak not only without previous preparation, but with a mind completely empty of thoughts. […] When he came out of this semi-involved state he found that the required speech had been already delivered. The next morning’s papers showed him what he had actually said. It was a unique speech, and gave the already famous Aurobindo an unrivalled position as a political leader with spiritually prophetic vision unknown before in the history of India.»

[The speech to which this description especially applies is the Bombay National Union Speech of 19 January 1908 published with the title “The Present Situation”]. 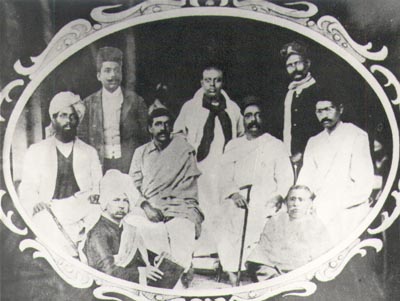 We will extract also some words from Barin about Mère (Mother), taken from “Khulnabasi” and published on 21 February 1940 — that is, on the occasion of the Mother’s birthday.

«In the Yoga-Ashram of Pondicherry, the Mother is the living embodiment of Sri Aurobindo’s Yoga. The touch of her creative genius has given the Ashram its present shape. The work of each department bears the stamp of her originality and constructive genius. It is doubtful if there is any other place on earth where such a big family could be seen carrying on like clock-work its day-to-day activities in silence and harmony, without a shade of conflict. The constructive power of the West and the whole-hearted surrender and self-giving of the East are moving hand in hand in the life of the Ashram.

But to have given a perfect shape to the Ashram is not the Mother’s greatest achievement. She is the living image and the other expression of the Yogic Power that is operating everywhere in the Ashram as its centre. To attribute Divinity to a human being may seem to others a sheer fantasy of the devotees or nothing but sentimentalism. But one who has had the slightest touch of the spiritual Power of Sri Aurobindo’s Yoga knows for certain that the open sesame of his Integral Yoga lies in the Mother alone.

Sri Aurobindo once said to me that he doubted if there was in the past any figure embodying so great a Yogic power. He added that he had done ten years’ Yoga by one’s contact with her. The Yogic Power of the Mother and Sri Aurobindo opened wide the doors of the unostentatious Ashram, so long in the grip of want and difficulty, to the steady inflow of sufficiency and prosperity. Spontaneous offerings came from disciples and admirers. The most ordinary men found in themselves an outflowering of the poetic power, a wonderful talent for painting, a capacity for meditation, occult vision and skillfulness in work. Day by day the Pondicherry Ashram grew into a Yogic place of pilgrimage for the entire world. An aspirant had a vision: the Mother and Sri Aurobindo were inside a golden tabernacle on the top of a luminous hill, and men from different climes from all directions thronged to the place in endless streams. Today his vision has materialised.

In the course of repeated experiences, a restless fellow, mad after work, with impurities unpurged, a man of vitalistic temperament, I have realised, from the play of the Mother’s miraculous Power, how true were the words of Sri Aurobindo. From the angle of Yogic vision the Mother has no equal even in India, the tapobhūmi.»