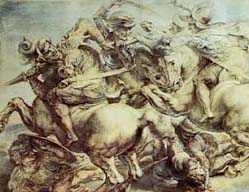 «O Force-compelled, Fate-driven earth-born race,
O petty adventurers in an infinite world
And prisoners of a dwarf humanity,
How long will you tread the circling tracks of mind
Around your little self and petty things?
But not for a changeless littleness were you meant,
Nor for vain repetition were you built;
Out of the Immortal’s substance you were made;
Your actions can be swift revealing steps,
Your life a changeful mould for growing gods.
A Seer, a strong Creator, is within,
The immaculate Grandeur broods upon your days,
Almighty powers are shut in Nature’s cells.
A greater destiny waits you in your front:
This transient earthly being if he wills
Can fit his acts to a transcendent scheme.
He who now stares at the word with ignorant eyes
Hardly from the Inconscient’s night aroused,
That look at images and not at Truth,
Can fill those orbs with an immortal’s sight.
Yet shall the godhead grow within your hearts,
You shall awake into the spirit’s air
And feel the breaking walls of mortal mind
And hear the message which left life’s heart dumb
And look through Nature with sun-gazing lids
And blow your conch-shells at the Eternal’s gate.
Authors of earth’s high change, to you it is given
To cross the dangerous spaces of the soul
And touch the mighty Mother stark awake
And meet the Omnipotent in this house of flesh
And make of life the million-bodied One.
The earth you tread is a border screened from heaven;
The life you lead conceals the light you are.
Immortal Powers sweep flaming past your doors;
Far-off upon your tops the god-chant sounds
While to exceed yourselves thought’s trumpets call,
Heard by a few, but fewer dare aspire,
The nympholepts of the ecstasy and the blaze.
An epic of love and failure breaks earth’s heart;
Her force and will exceed her form and fate.
A goddess in a net of transience caught,
Self-bound in the pastures of death she dreams of life,
Self-racked with the pains of hell aspires to joy,
And builds to hope her altars of despair,
Knows that one high step might enfranchise all
And, suffering, looks for greatness in her sons.»
(II.III.35-80).