YOGA IN THE WEST 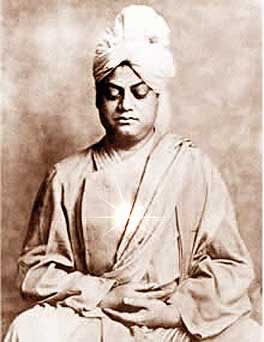 The word yoga is derived from the root yuj, which means to unite or to join together. The practice of yoga may lead to the union of the human with the Divine. Its aim is the transformation of human beings from their natural form to a perfected form.
The Yogic practices originated in the primordial depths of India’s past. The seeds of the yoga system may be discovered in the Vedic Samhitâ. Hiranyagarbha of the earliest Vedic and Upanishadic lore is spoken of as the first Being to reveal Yoga: hiranyagarbha yogasya vakta nanyah purâtanoh. It indicates that Yoga exercises were known and played a substantial part in the outlook of the epoch.
The philosophy of Yoga is based on the Upanishads. In the Katha Upanishad, yoga is likened to a chariot in which the reasoning consciousness is the driver, and the body is the cart. Mastery of the body is thus achieved by control of the senses. This text is an early example of the basic yogic belief that the mind and body are not inherently separate but linked.
The Upanishads accept the Yoga practice in the sense of a conscious search for the true knowledge of Reality. And it is in this view that the Yoga systems has drawn the attention of so many scholars in the West. Let us quote some of them.
Thomas Berry has observed: «As a spirituality, Yoga is intensely concerned with the human condition, how man is to manage the human condition, to sustain his spiritual reality in the midst of life’s turmoil and to discipline his inner awareness until he attains liberation ».
Adams Beck describes: «The true yogin is really the exponent of a wonderful and ancient system of psychology, one far more highly developed than any known in the West. He is the man who in mastering the secrets of the phenomenal life of the senses prepares us for the approach through death to Reality. In this matter, India took her straight and fearless flight to the innermost and outermost confines of thoughts and experience».
Yehudi Menuhin, who was among the first in the West to espouse yoga, said: «The practice of yoga induces a primary sense of measure and proportion. Reduced to our own body, our first instrument, we learn to play it, drawing from it maximum resonance and harmony.».
Sir John Woodroffe had a prolific output as a scholar of Tantra. He wrote: «That which is the general characteristic of the Indian systems, and that which constitutes their real profundity, is the paramount importance attached to Consciousness and its states. And whatever be the means employed, it is the transformation of the ‘lower’ into ‘higher’ states of consciousness which is the process and fruit of Yoga».
Carl G. Jung described yoga as «one of the greatest things the human mind has ever created». Jung formulated his archetypes in terms of the karma theory. He says: «We may accept the idea of karma only if we understand it as ‘psychic heredity’ in the very widest sense of the word».
Michael Pym has observed: «Yoga is a deadly serious business, requiring more courage, more intelligence, more will-power, and even more solid common sense than most of us possess. There is more to it than vague speculation or iridescent dreams. Not less but more, hard, daily grind; not less but, at times, more discouragement and flatness; not less but more, study, more patience, more self-control. Modesty, purity, complete and unostentatious sincerity, that inward loveliness which perfumes the whole being – that is something of yoga. Nothing is more quickly felt, more remarkable, than the intense sweetness, the touching simplicity of the true yogi».
Stefano De Santis author of Nature and Man, writes: «The system of Yoga, which follows the main Samkhyan views, the real being of man is the spirit, and that the spirit is free. The system of Yoga, which follows the main Samkhyan ontological principles, is a discipline meant to help man realize his spiritual nature and discover his own freedom. The living conditions of the man-in-the-world are seen by Yoga, man gets lost in the effort to acquire more and more things, in becoming more powerful, in gaining more appreciation and love. So he alienates his freedom in exchange for objects of gratification. In this way he gets entangled in the world nexus. It does not propose a discipline that leads man away from nature, but a discipline leading man away from the alienating attachments to false natures, i.e., away from his mental projections falsely imposed over reality. This means that yoga is a discipline which enables man to discover his true Nature. Because, according to Yoga, man’s essence is spiritual; and his true nature may be described as freedom».