Often we are asked about the meaning of the ‘logo’ that we have chosen to identify our association. 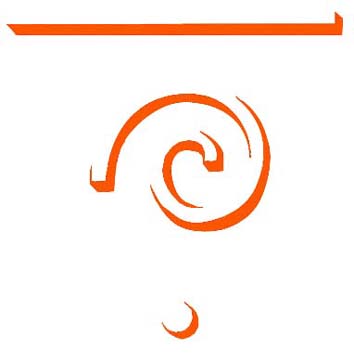 It’s easy — it is the graphic representation of the OM sound, spoken by the Indian mystic Literature as the primæval Sound which, in its three sillabic components — A - U - M — reminds the three states of consciousness analysed by the Upanishadic mysticism (see the Mandukya Upanishad), up to the so-called ‘Fourth State’ that, being transcendent, it is so to say expressed by the silence, when the sound vanishes.
In our own case, the horizontal line at the top of the symbol represents the A sound, while the central vortex it is the graphic representation of the U sound, and the point placed at the bottom of the symbol corresponds to the M sound. We have expressively arranged the three signs in a descending way, so to suggest a triangle that points down, inversing, in that way, the exoteric sense of the letters — the states of consciousness, clearly ascendents, here are turned upside down and, instead of and ever more elevated fly to heaven, it descends and manifests on earth their riches.

Universally known is, on the other side, the sillabic OM symbol written in devanagari characters, reproduces here below and belonging originally to the Vedic culture who first spoke of it. 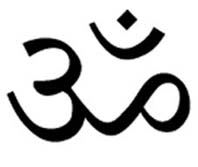 Recently, moreover, it is entered in the domain of a certain notoriety the correspondent sign utilised by the Tibetan language, which is very beautiful indeed. Here we have reproduced it with the colours that are indicated in Vajrayana mysticism. 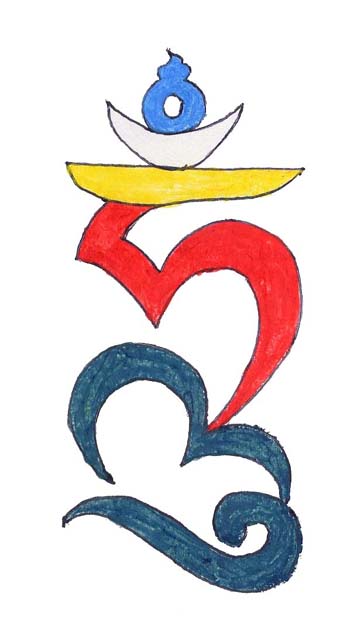 Surely less known, but very suggestive in its form, is the OM symbol written in the Tamil language, who reminds a shell and which — instead of indicating an ascending movement, as in Tibetan and Sanskrit languages, or in our that, as we have said, indicates a way of descent into matter — it seems to evoke a movement of interiorisation, or at least a way towards the center. 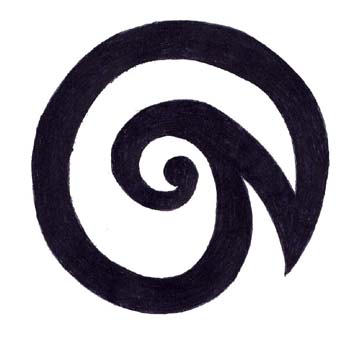 That’s it. We have offered a brief but, let us hope, exhaustive view of the symbol. Now, we need only to dive into the truth it expresses!