WHY HAS BODHIDHARMA LEFT FOR THE EAST? 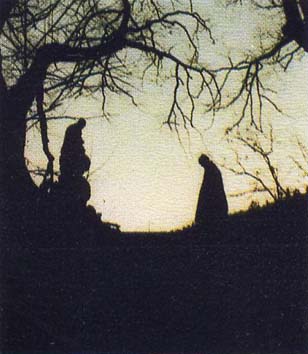 Bodhidharma is considered the 28th Patriarch after Shakyamuni Buddha, and his departure from India to China, in 526 B.C., signs the beginning of Chan Buddhism. A very difficult beginning, that it took one century to penetrate in Chinese culture and spread in all the Far East. The Chinese people were not really prepared at a so a revolutionary movement, and even the traditional Buddhists often try to prevent its diffusion, because of his contrast to the tradition of Buddhism, that emphasizes certain Scriptures and rituals. The central question is still one: what is the real essence of Buddhism? Which is the same as: why has Bodhidharma left for the East?
This question is itself, really, a Koan. When this question was put to the famous mystic Chao-Chou, he answered: «The cypress tree is in the courtyard». For the question doesn’t necessitate a mental answer, but stimulate to ponder about the real essence of Buddhism, that is — in brief — the necessity of an inner awakening, as in the movie the Koan that Hyegok, the old Zen master (who lived in a mountain with Haejin, an orphan little boy he has saved), give to Kibong, a young man who left home, stopped caring for his blind mother.
There are in fact three characters in the movie, and they represents three different generations, each with their own ideal peculiarity: the curiosity of the childhood, that becomes thirst for knowledge in the grown-up and acquired wisdom in old age.
This movie has the power to show us with utter simplicity the very heart of simplicity. The dialogues are cryptic and rare. Much of the way the story develops depends upon the images of mountains, rivers, forests, fires, and faces. His director, Bae Yong-Kyun, is himself a painter and a teacher of painting, he wrote, produced, photographed the film, too. Mountains, rivers, fire, has a precise connection with Zen and Taoism (the Shaolin monk, for instance, used to meditate for nine years of segregation in the mountains before returning in the ways of the world). To became enlightened means to awakens to all existences: stones, rivers, trees, animals, rain, fire. It means to start to see things as they really are. An old zen saying advices: “Before practising Zen, rivers were rivers and mountains were mountains. When I practised Zen, I saw that rivers were no longer rivers and mountains no longer mountains. And now I see that rivers are again rivers and mountains are again mountains”.
Moreover, the images of the movie are connected with a number of visual traditions of Far East, like ink painting. And it shows how simplicity of form can embody rich meanings. Scenic sequences are so seamlessly connected with the narrative that there is a blending of the story itself with long and careful inquiries of skies, panoramas, forests, waters, fires, and faces. Visually this film seems to be about the elements, earth, wind, fire, water — especially the last two. But overall the result is that the attentive viewer begins inextricably to interconnect the relatedness of the characters and the elemental process that make up the ever-flowing world in which we live, and the necessity to find a Permanence.
This way at the end of the movie all resolves in to peace. The old Master leaves his body, that is turned into ashes because a Zen master doesn’t want to leave any trace of his physical existence; the bird captured by Haejin is free, and Kibong looks out upon the mountains as he did at the beginning of the film, but now we see his eyes as well, presumably awakened to the reality of things, while the mountains again are mountains as before.